You are here: Home » Marketing » What is OTT TV and why is it trending?
Marketing

What is OTT TV and why is it trending?

If you were born around or before the 90’s you’ve probably experienced the shift that television viewing has experienced in the past two decades.

In earlier times, with traditional television sets, you would have to press the number keys on the remote to reach your favorite channel, while also constantly keeping track of what time your favorite show was going to be featured.

Doesn’t this sound a bit too tedious now? Things seem to have progressed at lightning-fast speed in the era of on-demand content. You can access any show and any channel that you like by just scrolling through the screen. You don’t even have to make yourself available at any particular time slot in order to watch it.

OTT services are causing quite a stir in the industry, with many people preferring video streaming services to traditional television.

What seems so normal to you these days, is actually a big leap from how things used to be less than a decade or two ago. Some may even argue that can the content we see around us even be classified as television anymore? You’ll get to learn why a bit later in this article.

2. Is there a difference between smart TVs and streaming devices?

3. How is OTT TV better than cable?

4. How can you monetize your OTT TV apps?

What is OTT TV?

Netflix, Amazon Prime, YouTube, etc. have become household names all over the world today. Boasting of at least 182 million subscribers worldwide, Netflix, like Google, has grown to become a verb in itself – ‘Netflix & Chill’. This is the power of OTT today.

OTT or Over-The-Top streaming is a service that allows you to watch online video content anytime and anywhere, without depending on traditional cable television.

You can watch your all-time favorite shows and films like Friends, The Big Bang Theory, and much more, right from the first season to the last by subscribing to these OTT TV platforms. Content is accessed at any time you like from cloud-based storage connected to each platform.

Movies and shows from every era are available on each of these platforms, with the convenience to watch whenever you want. With such superior quality content and seamless streaming, traditional cable television and broadcast cable networks have taken a back seat to make way for new-age content viewing through OTT TV.

Is there a difference between smart TVs and streaming devices?

Today, even though most viewers are purchasing smart TVs like Samsung, LG, Sony, Panasonic, etc, technology also provides you the option of using these streaming services on non-smart TVs.

You can, for example, connect a device like Amazon Firestick to your TV and watch all the content that is available on Amazon Fire TV. Amazon firestick is an example of a streaming device that has over 50 million monthly users.

Do you need to have streaming devices like Amazon Firestick and Roku if you’re already using a Smart TV? Yes and no. The smart TV you’re using is an important deciding factor when you’re thinking of buying an additional streaming device like Amazon Firestick or Roku. Many of the Smart TV platforms have their own store or have integrated with a third-party store like Android TV.

For example, Samsung TV has its own store and you don’t need to use a separate device like Roku or Amazon Fire TV. Some devices, like Mi TV, have integrated with the Android TV store, and you install all the Android TV apps without using devices like Roku.

How is OTT TV better than cable?

Back in the ‘90s or early 2000’s did you ever imagine you would be able to watch “Friends” whenever you want – in the middle of a workday when you’re taking a break or at night after work? No, right? You’d always have to wait up for the fixed time slot for the next episode of Friends to be broadcasted. This is the biggest difference between the service provided by OTT TV and cable/ satellite TV.

4 reasons why OTT TV has overshadowed cable and satellite television:

1. Unlike the traditional satellite television of the past, OTT TV allows users the discretion of watching any online video content like shows, videos, and films at any time they’d like and in any order they like. You can watch the same episode a gazillion times and stop only when you really want to!

2. OTT TV and OTT platforms are becoming increasingly popular for high-quality content that is not available on cable. These days, so many unique and low budget movies are released on OTT that people are able to connect with. OTT Platforms like Amazon Prime and Netflix are able to pay producers a substantial amount of money for releasing these movies on their platforms.

3. OTT platforms also offer a much larger audience and viewership potential to content creators, with the additional benefit of expanding revenues at lower costs compared to satellite television.

With the power of the internet and cloud-computing, content can be accessed from anywhere in the globe. It is no longer restricted to local network and connectivity – this gives content providers an opportunity to reach far larger audiences, thereby increasing their revenue potential by multifold.

4. Content creators also have easy access to platforms that can help them launch their own OTT apps as well.  There are a lot of options for you to quickly launch your OTT service while keeping your costs low.

How can you monetize your OTT TV apps?

There are several methods that allow you to generate revenue for your OTT service. Let’s look at each of them:

You must have heard of YouTube advertising, where an ad pops up at the start or in the middle of a video you are watching. This is how the video creator can earn revenues from his/her video. The advertiser pays for the ads that are appearing on a video. Similarly, OTT apps too can be monetized through advertisements. This is called Advertisement Video on Demand.

AVOD is a great way to earn money for content creators who can generate high volumes of views on their videos. Advertisers pay the content creator to run their ads during the latter’s content.

If you’re a subscribed user of Netflix, you sure have paid a subscription fee to avail the services and content it offers, right? Subscription fees are usually paid monthly, quarterly, or annually. This is how apps monetize through the SVOD or subscription video-on-demand model.

The SVOD model works beneficially for the content provider as well as the content viewers. To the former, it is a great way to monetize their content through regular revenue streams, while for the latter it offers a great deal of flexibility of subscribing or unsubscribing based on need or requirement.

If a user has signed up for a subscription, the discretion to renew that subscription for the following year stays completely with the user. Thus, to successfully earn revenues through the SVOD model, you need to ensure that you are retaining your existing users while also increasing your user base.

You can treat SVOD like a buffet served at a restaurant and you’ve paid for it. This allows you to watch an unlimited amount of the content that is part of the SVOD-offered content, an unlimited number of times. And then, there comes this movie or show that is not part of the buffet served to you. But, it is available as a singular purchase for a limited period of time. This is how the TVOD or transactional video-on-demand model works.

For example, the movie Ford v. Ferrari was not part of any SVOD models offered by Amazon Prime. This movie was introduced for $19.99 to be watched within a specific period of time or for a certain maximum number of times only.

To ensure that the movie has a good number of subscriptions, Amazon had to focus a lot of its marketing efforts across several verticals of the business to promote this offer. Though it’s a bit of an additional effort, the net revenue per view is way higher compared to the other models mentioned above.

In conclusion, you can see that OTT TV and OTT apps are becoming a necessity in every household and are slowly moving towards making television completely redundant for users.

Producers of shows that became popular through cable and satellite television have recognized the potential of OTT TV and moved all their content online. Film producers are sure that OTT platforms are a big boon for their films too.

The change in the behavioral pattern of content consumers has proven that films have a larger potential to earn the revenue they deserve through OTT TV and OTT platforms over screening in theatres too, in some cases. With lower entry barriers and unlimited scope for revenue generation, OTT apps and OTT platforms are here to stay and only grow. 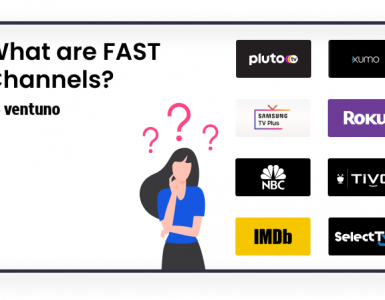 What are FAST channels?

Listen to this article The FAST TV audience has been on the rise in recent times. Multiple FAST platforms are now bigger in terms of the number of viewers compared to cable and satellite TV platforms in the U.S. This is...

SVOD, AVOD or TVOD: Choose the best for your video business

Listen to this article When Netflix started in 1997, it disrupted the video rental industry by selling and renting DVDs through postal service. Now, not many people remember buying VHS tapes and DVDs from video renting...